Miami Mayor Manny Diaz, and Conference President, said that “with a new Administration that has already committed to make climate protection a priority, we look forward to working with President-elect Barack Obama to help these 900 + cities reach the goal set forth by the Kyoto Protocol.”

The Kyoto Protocol went into effect on February 16, 2005 for over 100 nations around the world, but not for the United States. But Mayor Greg Nickels, Vice President of the Conference who launched the effort three years ago, stated that “as our nation and metro areas work to reduce carbon emissions, our determination will open new opportunities for clean energy and green jobs,”

Under this agreement, cities pledged to reduce carbon emissions by 7 percent below 1990 levels by 2012; strive to meet or beat the Kyoto Protocol targets in their own communities; and to urge Congress to pass the bipartisan GHG reduction legislation.

The organization says that under this new agreement more than 81 million Americans are represented. That’s great because according to Zogby, 75-percent of Americans support investment in clean energy. Of course, this is all on the heels of President-elect Barack Obama issuing a major policy statement on global warming.

Wanna know if your mayor signed? Here’s the list. If they didn’t, urge them to sign or vote them out! 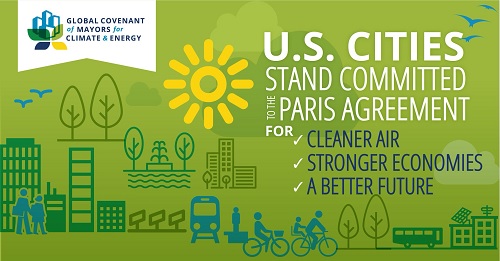