It’s well known that politics is dirty, but recently, anti-climate bill tactics have sunk to a new low:  forging letters written by senior citizens against the Waxman-Markey climate bill.

The Markey Select Committee on Energy Independence and Global Warming is investigating the fake letters sent by the lobbying firm Bonner & Associates claiming the elderly were opposed to the climate bill for fear it would raise utility costs. Five more suspected forgeries were released today bringing the grand total to 58 letters under investigation.

One of the forged letters, sent from the “Butler Senior Center” of Lyndora, Pennsylvania reads:

You are about to vote on important environmental legislation (the Waxman-Markey bill).  We support making the environment cleaner, but the reason we are writing is that we are concerned about our electric bills.  Many seniors, as you know, are on low fixed incomes.  The cost to heat and cool our homes, run hot water and use other appliances is very important to those on a budget.

Our state gets 56% of its electricity from coal. We urge you to pass legislation that reduces greenhouse gases but at the same time protects consumers from unaffordable increases to the basic necessity of electricity.

We ask you to use your important position to help protect seniors and other consumers in your district from higher electricity bills.  Please don’t vote to force cost increases on us, especially in this volatile economy.

We’ve seen fear-mongering with our nation’s senior citizens with health care, and now we’re seeing fraud-mongering with senior citizens on clean energy.  Lately, democratic debate has been deceptively debased by fake facts and harsh rhetoric. We must return to an honest discussion of the issues and ensure that this sort of campaign does not further poison the well of trustworthy debate.

Image by neovain on Flickr under a Creative Commons License 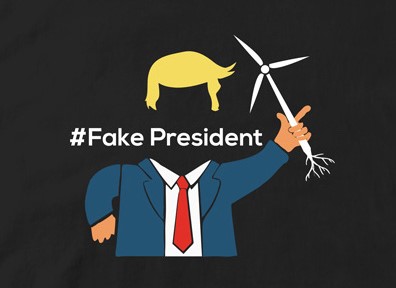 Fake news: Why does Donald Trump continue to lie on basic facts about climate change and cleantech?