I was quite pleased to find out today that the Kewaunee nuclear-power plant in Wisconsin will close next year. Partly I was happy because the owner of this plant is Dominion Resources, which is trying to decide if it wants to build another reactor near my home in Louisa County, Virginia. Dominion stepping out of Kewaunee increases the chance they will never build North Anna 3 for several reasons:

If you cant make the economics of an already operating plant, which has a license to run until 2033, how is it going to make economic sense to build a brand new expensive plant, with all the new reactors running wildly over budget and years delayed?

Another one bites the dust

Dominion paid $220 million for the single small reactor (556 MW) in 2005 and has been trying to sell it since April of last year. But there are no buyers for this white elephant.

The Washington Post article on the closure points out that fewer than 20 commercial reactors have been closed in the US and the last one was in 1998. But nuclear power in the US is losing it’s race against time. The fleet is aging far faster than new units are being built and while the NRC is granting life extensions to ever utility which asks for one, it cannot beat the fundamental truth that these plants – even with sunk costs long covered – are becoming greater liabilities than assets.

State of the globe

Separately, the World Nuclear Industry Status Report for 2012 was released. Here is part of the executive summary:

• Startups and Shutdowns. Only seven reactors started up, while 19 were shut down in 20111 and to 1 July 2012, only two were started up, just compensating for two that were shut down so far this year. As of end of June 2012 no reactor was operating in Japan and while two
units at Ohi have got restart permission, it remains highly uncertain, how many others will receive permission to restart operations.

• Nuclear Phase Out Decisions. Four countries announced that they will phase out nuclear power within a given timeframe: Belgium, Germany, Switzerland and Taiwan.

• Newcomer Program Cancellations. At least five countries have decided not to engage or reengage in nuclear programs, although they had previously planned to do so: Egypt, Italy, Jordan, Kuwait, and Thailand.

• Construction Cancellation. In both Bulgaria and Japan two reactors under construction were abandoned.

• Construction Starts. In 2011, construction began on four reactors and two so far in 2012.

• New Build Project Cancellation. In Brazil, France, India and the United States new build projects were officially cancelled. In the Netherlands, the U.K. and the U.S. key utilities withdrew leaving projects in jeopardy.

• Certification Delays. The certification of new reactor technologies has been delayed numerous times. The latest announcement concerns the  certification in the U.S. of the Franco-German designed EPR2 that was pushed back by 18 months to the end of 2014.

• Construction Start Delays. In various countries firmly planned construction starts were delayed, most notably in China, where not a single new building site was opened, but also in Armenia, Finland and the U.S.

paxuscalta Paxus was abandoned by his wolf parents and raised by liberals in the suburbs of Boston. He has hitchhiked on sailboats across the Pacific, danced top Russian tanks before Yeltsin made it fashionable, smuggled Tibetan monks across the Himalayas, navigated submarines on the ocean floor in Hawaii, worked on the oil rigs on the North Slope of Alaska and fought nuclear power plants in eastern Europe. At Twin Oaks he manages recruiting for the community and marketing for the businesses, makes tofu and tries to spark revolution when ever possible. He suffers from terminal immodesty and an inflamed funny bone. He is part of a polyamorous family and co-parent for an extraordinary 9 year old named Willow. 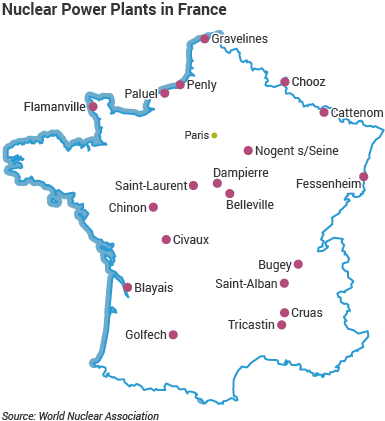 Macron to close more of France’s nuclear reactors (but why NOW?)