James Howard Kunstler – Breaking Bad vs the banksters (plus Obamacare!)

The past two months I’ve taken in all but the final few episodes of Breaking Bad, America’s loathe letter to itself. What a metaphor for a nation’s transition from an ethos of earnest effort to a mood of criminal buffoonery. For you who haven’t tuned in to this cultural artifact, Breaking Bad is a cable TV series about a bland high school chemistry teacher, Walter White, who, facing an expensive battle with lung cancer, decides to get into the lucrative business of cooking methamphetamine, the most atrocious recreational drug there is. The series follows his misadventures in the trade.

The really remarkable thing about the series is that the most interesting theme in the long-running story remains completely undeveloped — at least so far to within a few installments of the end. That is, Walter’s existential predicament as a hostage to America’s medical racketeering matrix. For many families like Walter White’s, a cancer diagnosis is tantamount to a parallel judgment of financial ruin.

Like everybody else in America these days, poor Walter just submits to his fleecing. In fact, the blandest moments in the long-running melodrama are the scenes when Walter forks over his massive payments to a grandmotherly-type lady at the hospital billing desk. She’s as sweet as pie, though she also seems rather sweetly surprised that he is actually able to pay his bill. He pays for his treatments, of course, with the income derived from his meth cooking venture. His doctors are portrayed as demigods. There is zero discussion by them of A) the cost of his cancer treatments, and B) the legitimacy of the costs. That’s not their department. He just has to come up with hundreds of thousands of dollars.

Which he does, simply by discarding his persona as an earnest schoolteacher and entering the ranks of illicit drugdom. Of course, the series is mostly concerned with the twists, turns, and torments of that transition, and the metaphors in that are also rich as to what America has lately become. For instance, Walter’s success as a criminal stems from his technological skills. He is the meth cooker supremo because his formula is the best, his lab practices are the most exacting, his standards are the highest! Walter White is the Steve Jobs of meth. He puts out the best product and won’t settle for less than perfection.

This jibes nicely with America’s current mood of techno-rhapsodic psychosis, in particular our tendency to ignore all the diminishing returns and blowback from our techno-grandiose endeavors — which range from the magic of shale-oil fracking to the romance of “green” skyscrapers, to high-frequency front-running in the stock markets, to the recruitment of every teenager in America into an obsessive-compulsive cell-phone culture. It’s all good. Walter White’s “ace-in-the-hole” is his science training.

Another winning metaphor is the supernatural amount of cash-money on display in almost every episode once Walter gets rolling in the meth trade, duffle-bags full of exquisite, freshly packed-and-stacked banknotes, so much that tossing a quarter-million here, a quarter million there loses its meaning. The stuff is tossed around like junk mail. This is not inadvertent, of course. It depicts nicely the disintegration of America’s value system: money is everything and nothing. Walter quickly joins the “one percent” earnings-wise. It hardly makes him a better person. His money-making operations are as disgusting as the “innovation” of new swindles among the Too-Big-To-Jail bankers. By mid-way through the series, Walter even has enough petty cash on hand to pay for his brother-in-law’s hospital and rehab bills, after the BOL is shot up by Mexican drug gangsters. The fantastic cost of all that is also ignored.

An additional metaphor is found in Walter’s “employer,” the super-polite neatnik Gustavo Fring, who rules the Albuquerque-based drug empire via a false-front fast-food chain of chicken eateries. Fring is the fantasy of every businessman’s ideal self-image: meticulous, careful, fair, — until Walter White’s buffoonery shoves him over the edge and Gus, too, breaks bad, so to speak, in his own fussy way. And business itself is depicted as the highest-and-best expression of human culture, just as it has been since the reign of Ronald Reagan.

Finally, there is the matter of what the fruits of Walter White’s techno-savy work does to the “consumer” public who buy his product. It turns them into zombies. It’s also almost too obvious to state that the popularity of zombies in American culture has exactly paralleled the financialization of the American economy. That half the action of Breaking Bad takes place in and around automobiles — in the parking-lot wasteland of Albuquerque — is just the cherry on the metaphorical cake. This is who we are. 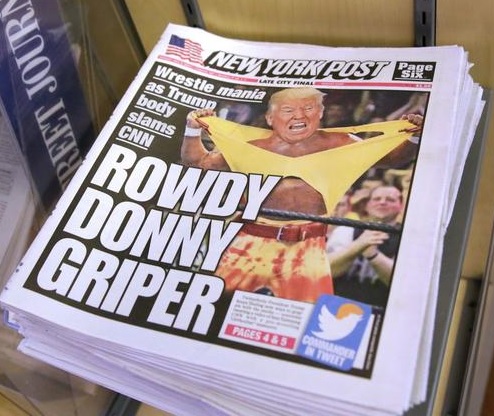