In one of the biggest environmental conflicts of interest in recent California history, a Big

However, the “rubber stamping” of fracking operations by the federal government has at least temporarily stopped. The federal government has agreed to stop approving fracking from oil platforms in the Santa Barbara Channel until it conducts environmental studies to determine whether the controversial practice is safe for marine life and the environment, according to two separate legal settlements filed in the U.S. District Court in Los Angeles by the Center for Biological Diversity and the Environmental Defense Center on Friday, January 29.

A press release from the Center for Biological Diversity stated, “The agreement resolves a Center for Biological Diversity lawsuit that challenged the U.S. Department of the Interior’s practice of rubber-stamping fracking off California’s coast without engaging the public or analyzing fracking’s threats to ocean ecosystems, coastal communities and marine life, including sea otters, fish, sea turtles and whales.” (www.biologicaldiversity.org/…)

“This halt to offshore fracking is a huge victory for California’s coastal environment,” said Kristen Monsell, a Center attorney. “Offshore fracking is a dirty and dangerous practice that has absolutely no place in our ocean. The federal government certainly has no right to give the oil industry free rein to frack offshore at will.”

The agreements reached by the two environmental groups apply to operations off Ventura and Santa Barbara counties, where the Exxon Mobil Corporation and other oil companies operate platforms.

Oil companies fracked over 200 wells in state and federal waters off Long Beach, Seal Beach, Huntington Beach and the Santa Barbara Channel during a 20 year period, as revealed by an Associated Press investigation and Freedom of Information Act (FOIA) request by the Environmental Defense Center in 2013.

The oil industry has “federal permission” to dump more than 9 billion gallons of wastewater, including chemical-laden fracking fluid, into the ocean off California’s coast every year, noted Monsell.

The federal government permitted the dumping of fracking wastewater into Southern California ocean waters at a time when Big Oil, the Western States Petroleum Association, and other corporate interests have captured the regulatory apparatus. (www.dailykos.com/…)

The Center agreement requires the Interior Department’s Bureau of Ocean Energy Management and Bureau of Safety and Environmental Enforcement to analyze the environmental dangers of offshore fracking and acidization under the National Environmental Policy Act (NEPA). “The settlement also prohibits federal officials from authorizing these inherently dangerous practices in federal waters until that analysis is concluded,” the Center said.

The settlement requires a “programmatic environmental assessment” to be completed by May 28, 2016. It also requires the public to be given at least 30 days to review and comment on the draft assessment. You can read the settlement document at:www.biologicaldiversity.org/…

Monsell said the settlement follows the city of Long Beach’s decision in December not to proceed with 13 planned offshore fracks that would have been the first offshore fracking operations in state waters since 2013. Center scientists have found at least 10 fracking chemicals routinely used in offshore fracking in California could kill or harm a broad variety of marine species, including sea otters and fish.

Some of the many fish species that could be harmed by fracking pollution include white seabass, sand and kelp (calico) bass, lingcod, sheephead, ocean whitefish, yellowtail, bonito, barracuda, yellowfin tuna, sculpin, yellow croaker, barred surfperch and dozens of species of rockfish.

“Every offshore frack puts coastal communities and marine wildlife at risk from dangerous chemicals or another devastating oil spill,” Monsell said. “Once federal officials take a hard look at the dangers, they’ll have to conclude that offshore fracking is far too big of a gamble with our oceans’ life-support systems. They’ll have to stop authorizing it for good.”

Agreement could impact oversight of all federally permitted offshore fracking

Monsell also said that the settlement agreement could also impact the oversight of all federally permitted offshore fracking, incuding fracking operations in the Gulf of Mexico.

“Platforms Harmony, Heritage, and Hondo are owned and operated by ExxonMobil, and oil from those platforms feeds into Plains All American Pipeline 901, which burst last year near Refugio State Beach, releasing hundreds of thousands of gallons of oil into the local environment,” EDC said in a news release. (www.environmentaldefensecenter.org/…)

“This settlement is an important first step in addressing the use of dangerous well stimulation techniques including fracking and acidizing from oil platforms located off California’s coastline,” said Brian Segee, Senior Attorney with EDC. “These practices are currently being conducted under decades old plans with out-of-date or nonexistent environmental analysis, and this settlement will finally force the federal government to consider their impacts in detail with a transparent process open to public review and input.”

Moratorium is a big step forward, but MLPA of 1999 needs to be fully implemented

While this offshore fracking moratorium is a victory for marine life, the environment and the people of California, the many flaws of the “marine protected areas” created under the privately funded Marine Life Protection Act Initiative have never been resolved. California waters can’t be fully protected until the Marine Life Protection Act of 1999 is fully and justly implemented and enforced.

First, the marine protected areas created under the MLPA Initiative still fail to protect the ocean from pollution, fracking, oil drilling, oil spills, military testing, corporate aquaculture and all human impacts other than sustainable fishing and gathering. The moratorium on offshore fracking is a big step in the right direction, but much work needs to be done to fully protect ocean waters both inside and outside marine protected areas.

Third, the terminally flawed science and false assumptions of the process have never been addressed – nor has a long-needed investigation of the role that a convicted embezzler, Ron LeValley, played in crafting the initiative’s “science” ever been conducted. LeValley, who served a 10 month federal prison sentence for conspiracy to embezzle over $830,000 from the Yurok Tribe, co-chaired the MLPA Initiative “Science” Advisory Team for the North Coast.(www.northcoastjournal.com/…)

Fourth, a long overdue investigation of the numerous conflicts of interest that plagued the MLPA Initiative process, including the leadership role that Catherine Reheis-Boyd, President of the Western States Petroleum Association (WSPA), played in the MLPA Initiative as offshore fracking was taking place in Southern California waters, has never been initiated. WSPA has effectively captured the state’s regulatory apparatus, along with agribusiness and other corporate interests.

Fifth, state officials originally pledged to conduct a regional review of the so-called “marine protected areas” created under the controversial MLPA Initiative every five years, but they have now reversed course and plan to do the reviews only once every 10 years. Everybody who cares about real marine protection and science must demand that the reviews be conducted every five years, as was originally planned. (www.dailykos.com/…)

For more information about the “Inconvenient Truths” about the MLPA Initiative, go to: intercontinentalcry.org/…

(Photo of oil rigs off the California coast courtesy of Drew Bird Photography 2015.) 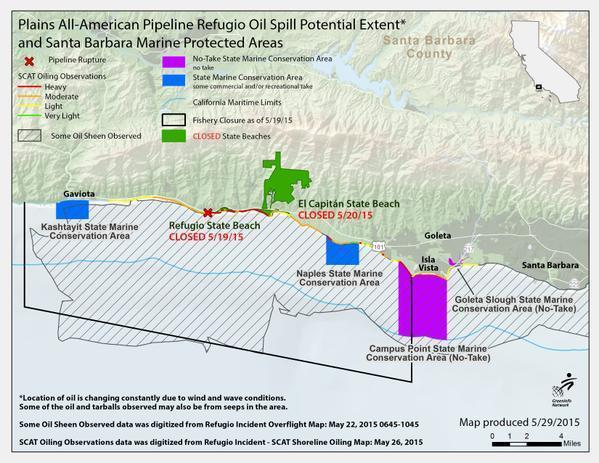