Party in response to a report by a prominent consumer group claiming that the party acted as a “laundry machine” to funnel donations from oil, energy and utility companies to Brown’s 2014 election campaign.

In her letter to the Santa Monica-based Consumer Watchdog, Galena West, Chief of the FPPC’s Enforcement Division, said the division “will investigate the California Democratic Party for alleged violations of the Political Reform Act’s campaign reporting provisions resulting from information contained in your sworn complaint (Brown’s Dirty Hands Report.)”

She said the FPPC will not not be opening an investigation into “the other persons,” including Governor Brown, identified in the complaint at this time.

West said Consumer Watchdog will next receive notification upon final disposition of the case, but didn’t provide any time frame for the case’s disposition.

“However, please be advised that at this time we have not made any determination about the validity of the allegations you have made or about the culpability, if any of the persons you identify in your complaint,” she said.

After receiving the FPPC letter, Jamie Court, president of Consumer Watchdog, said, “We are pleased that the FPPC has launched an investigation into the troubling pattern of contributions to the California Democratic Party by oil, utility and energy companies uncovered in ‘Brown’s Dirty Hands.’”

“The Party and members of the Administration who worked for it have a lot of questions to answer. Political parties shouldn’t be used as laundry machines for money from unpopular companies or for campaign contributions in excess of candidate-permitted limits,” he stated.

The report tabulated donations totaling $9.8 million dollars to Jerry Brown’s campaigns, causes, and initiatives, and to the California Democratic Party since he ran for Governor from 26 energy companies with business before the state, according to Court. The companies included the state’s three major investor-owned utilities, as well as Occidental, Chevron, and NRG.

“An exhaustive review of campaign records, publicly-released emails and other documents at PUCPapers.org, court filings, and media reports, showed that Brown personally intervened in regulatory decisions favoring the energy industry, and points to Brown and his operatives having used the Democratic Party as a political slush fund to receive contributions from unpopular energy companies in amounts greater than permitted to his candidate committee,” Court said.

“The timing of energy industry donations around important legislation and key pro-industry amendments, as well as key regulatory decisions in which Brown personally intervened, raises troubling questions about whether quid pro quos are routine for this administration,” said consumer advocate Liza Tucker, author of the report. “While Brown paints himself as a foe of fossil fuels, his Administration promoted reckless oil drilling, burning dirty natural gas to make electricity, and used old hands from industry and government, placed in key regulatory positions, to protect the fossil fuel-reliant energy industry.”

In response to my request for a comment on the FPPC probe,  Deborah Hoffman, Governor Brown’s Deputy Press Secretary replied, “Thanks for reaching out. Questions  are best directed to the party being investigated. As noted in the response letter, the FPPC ‘will not be opening an investigation regarding the other persons identified’ in the complaint. I don’t expect we’ll be commenting.’”

Brown spokesman Evan Westrup told the San Diego Union Tribune on August 10, in response to the report, “The governor’s leadership on climate is unmatched. These claims are downright cuckoo.” (www.sandiegouniontribune.com)

Michael Soller, a spokeperson for the Democratic Party, said in the Sacramento Bee on September 24, “ “We received the letter, we’re aware of it and we’ve been fully cooperating with the FPPC.” However, he declined to comment any further on the investigation.

State law limits the amount that individuals, businesses and committees can contribute to political candidates. In the 2014 election cycle, a single donor was limited to $54,400 for a candidate for governor, according to Tucker.

However, donors can give unlimited amounts of money to political parties. During the 2014 cycle, parties were allowed to give up to $34,000 from each donor to a candidate per year.

In one of many examples of the alleged use of the party as a “laundry machine” for political contributions to Brown cited in the report, Chevron donated $135,000 to the California Democratic Party on the same day lawmakers exempted a common method of well stimulation from legislation meant to regulate fracking, according to Tucker.

After the legislation, Senate Bill 4, passed with an amendment dropping a moratorium on fracking permits, Occidental gave $100,000 to one of Brown’s favorite causes, the Oakland Military Institute. Brown signed the gutted bill on September 20, in spite of strong opposition by a broad coalition of conservation, environmental justice, tribal and consumer organizations.

Following an ethics complaint filed by Consumer Watchdog against McFadden, the  FPPC on March 24opened an investigation into her failure to report the dates and times of stock sales in PG&E, her former employer.

The FPPC said there was “insufficient evidence” to pursue an investigation into whether McFadden violated other conflict of interest laws. However, the agency said it would look into the “apparent failure of Ms. McFadden to disclose the status of her stock ownership in Pacific Gas and Electric.”

In the report, Tucker said the timing of certain donations “coincided with legislative or regulatory action on behalf of these companies.” Among the examples detailed in the report are the following:

• “Southern California Edison donated $130,000 to the California Democratic Party, its largest contribution up until that time, on the same day PUC President Michael Peevey cut a secret deal with an SCE executive in Warsaw, Poland to make ratepayers cover 70 percent of the $4.7 billion cost to close the fatally flawed San Onofre nuclear plant.  Brown backed the dirty deal, telling Edison’s CEO personally, according to an email from the CEO uncovered by the Public Records Act, that he was willing to tell the media on the day of the plant’s shuttering that the company was acting responsibly and focused on the right things. Three days prior to SCE’s announcement that it would close San Onofre permanently, the company donated $25,000 to the California Democratic Party.

•Emails from PG&E’s top lobbyist Brian Cherry to his boss claim that Brown personally intervened with a PUC Commissioner to persuade him to approve a natural gas-fired power plant called Oakley for the utility. In a January 1, 2013 email, Cherry described a New Year’s Eve dinner with Peevey where Peevey reminded him “how he and Governor Brown used every ounce of persuasion to get [Commissioner Mark] Ferron to change his mind and vote for Oakley…Jerry’s direct plea was decisive.” PG&E donated $20,000 to the California Democratic Party the day after the PUC voted for the project. An appeals court would later strike down the decision because PG&E had not proved its necessity.

•While PG&E’s lobbyist and then-PUC President Michael Peevey fed names to Brown’s executive secretary, former PG&E vice president Nancy McFadden, to appoint the critical swing-vote PUC commissioner who would cast pro-utility votes, PG&E donated $75,000 to the California Democratic Party. The same day that Brown appointed ex-banker Mark Ferron to the commission, PG&E donated another $41,500. The appointment lifted the value of PG&E’s stock and the PG&E stock held by McFadden and valued as high as $1 million.

For the FPPC letter announcing the investigation, go here: www.consumerwatchdog.org/…

For a video on the report, go here: www.youtube.com/…

As this FPPC investigation proceeds, the big corporate money behind Governor Jerry Brown’s controversial environmental policies is facing increasing scrutiny from public trust advocates. November 4will be the second anniversary of the passage of Proposition 1, Governor Jerry Brown’s controversial water bond, a measure that fishing groups, California Indian Tribes, grassroots conservation groups and environmental justice advocates opposed  because they considered it to be a water grab for corporate agribusiness and Big Money interests.

Proponents of Proposition 1 contributed a total of $21,820,691 and spent a total of $19,538,153 on the successful campaign. The contributors are a who’s who of Big Money interests in California, including corporate agribusiness groups, billionaires, timber barons, Big Oil. the tobacco industry and the California Chamber of Commerce. They provide a quick snapshot of the corporate interests behind the questionable environmental policies of Brown. For more information, go to: www.counterpunch.org/…)

While Jerry Brown often receives fawning coverage from the mainstream media when he appears at climate conferences in California and across the globe,  his policies on fish, wildlife, water and the environment are among the most destructive of any governor in recent California history.

The Governor’s “legacy project,” the Delta Tunnels/California Water Fix, poses a huge threat to the ecosystems of the Sacramento, San Joaquin, Klamath and Trinity river systems. The project is based on the untenable premise that taking more water out of a river before it reaches the estuary will somehow “restore” the San Francisco Bay Delta and its precious fish and wildlife species.

Unfortunately, the California WaterFix is not the only environmentally devastating policy promoted by Governor Jerry Brown. Brown is promoting the expansion of fracking and extreme oil extraction methods in California and is overseeing water policies that are driving winter run-Chinook salmon, Delta and longfin smelt and other species closer and closer to extinction.

As if those examples of Brown’s tainted environmental legacy weren’t bad enough, Brown has promoted carbon trading and REDD policies that pose an enormous threat to Indigenous Peoples around the globe; has done nothing to stop clearcutting of forests by Sierra-Pacific and other timber companies; presided over record water exports from the Delta in 2011; and oversaw massive fish kills of Sacramento splittail and other species in 2011.

Jerry Brown also oversaw the “completion” of so-called “marine protected areas” under the privately funded Marine Life Protection Act (MLPA) Initiative, overseen by a Big Oil lobbyist and other corporate interests, in December 2012. These faux “Yosemites of the Sea” fail to protect the ocean from oil drilling, fracking, pollution, corporate aquaculture and all human impacts on the ocean other than sustainable fishing and gathering.

Brown spouts “green” rhetoric when he flies off to climate conferences and issues proclamations about John Muir Day and Earth Day, but his actions and policies regarding fish, water and the environment should be challenged by all of those who care about the future of California and the West Coast.

The Epic Battle Between Big Oil and the People of California 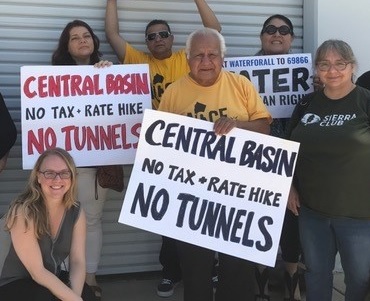 Why did the Fed Interior Dept misuse $84 million for California Delta Tunnels planning? 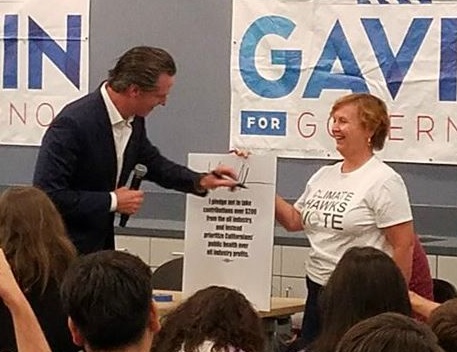