Interestingly, the 25th amendment allows for the removal of a president from office on account of incompetence or disability, but not for being an embarrassment to the nation. Who needs Russia when the Tweety-Bird-in-Chief is hacking his own presidency into a global joke? Or at least it might be a joke if the USA weren’t such a menace to international order, and to itself, by the way.

All it takes is for the “liquidity” flows to seize up and before you know it, there’s no food in the supermarkets because everything in our just-in-time economy is exquisitely calibrated to the sure expectation of getting paid, and when that goes, it all goes.

Then the question arises: well, can’t you just re-start the liquidity flows? Not when the process requires another abracadabra magic act of summoning X-trillions of dollars out of absolutely nothing when the previous X-trillions created out of absolutely nothing are rushing at warp speed into the black hole of deleveraging because it has been discovered that the “loans” they were based on can never be paid back, not in this universe or any number of universes like it. In a word, they’re worthless.

The preview of coming attractions is currently playing out in Illinois — soon to be joined by Connecticut, California, Kentucky, as many other bankrupt states face their individual micro financial meltdown.

Illinois is dead broke. It can’t pay the contractors who fix things like roads and storm drains, and supply food to its prisons. It’s over $200-billion deep in pension obligations that will never be honored. Its Medicaid system is a shambles.

It doesn’t even have the cash-on-hand to pay lottery winners (what happened to all the cash paid into the lottery by the suckers who didn’t win, which is supposed to pay off the winners?). The state legislature hasn’t passed a budget in three years.

The governor and the mayor of Chicago and everybody else nominally in charge have no idea what they’re going to do about it. Think the federal government is going to just step in and save the day there?

They’d have to bail out every other foundering state and that’s just not going to happen, especially with that same federal government about to run out of cash money itself, with no resolution of the debt ceiling controversy that might allow it to even pretend to borrow more money by issuing treasury bonds that are instantly bought by the Federal Reserve — which, of course, is not an official government agency but a private banking consortium contracted to manage the nation’s money.

Do you begin to see the outlines of the clusterfuck rising like a bad moon over the harvest season of 2017? The American people, by and large, have no more idea how false and fragile the financial arrangements of the nation are than the average eight-year-old has about why the repo squad is towing away Daddy’s Ford-F150.

We’re just doing what we always do: gittin’ our summer on. Breaking out the potato salad and the Bud Lites — at least those who have enough mojo left in their MasterCards to charge the party supplies.

An awful lot of Americans must be maxed out, though, people who actually used to work at things and get paid for it.

Each one of them is a walking Illinois now, facing each dawning day with a bigger load of problems, more things they can’t pay for, and moving closer to the dreadful day when everything is gone, every chattel, every knickknack, the very roof over their head, and most particularly the belief that they live in a fair and decent society.

So, I wonder what we’re going to do with a Tweety-Bird-in-Chief in the White House when this deal goes down. Stresses and tensions are out there a’buildin’ and the time for being a nation of feckless idiots is drawing to a close.

The sad thing is: it wasn’t even fun while it lasted.

Trump is just an obnoxious symptom of the coming financial meltdown 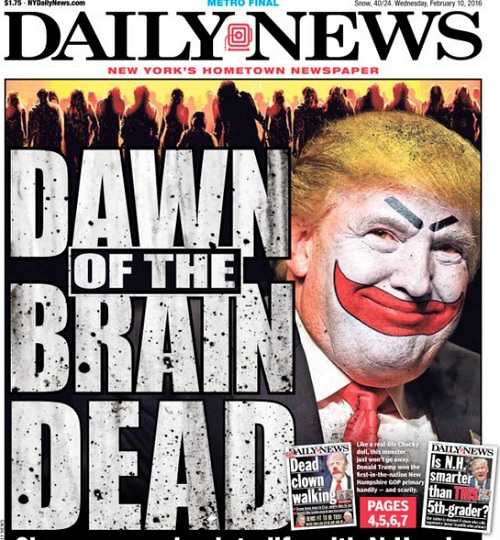