As Hurricane Florence bears down on the Carolinas and Virginia, a million climate deniers are rushing to escape the brunt of the storm without ever stopping to ask why they are in the path of one of the most powerful storms ever to hit the Atlantic coast. Staunchly conservative, many of the residents fleeing inland are ferocious critics of climate science.

In 2012, the North Carolina legislature, which was firmly in the grip of reactionaries, passed a law forbidding state agencies from basing any future plans on a report from its own Coastal Resources Commission which warned ocean levels along the coast could rise as much as 39 inches before the end of the century. Instead, the law forbid making any plans based on estimates of climate changes that would occur more than 30 years in the future.

The warnings from the CRC alarmed developers operating near the coast, who feared they would lower property values and drive up insurance costs. The legislation was sponsored by Pat McElraft, who stated, “The science panel used one model, the most extreme in the world. They need to use some science that we can all trust when we start making laws in North Carolina that affect property values on the coast.” In other words, science that supports a pro-business agenda, not reality.

The North Carolina legislature is famous for taking outrageously radical stands on things that offend the tender sensibilities of its members. In 2016, it jumped into the transgender bathroom debate with both feet, creating a draconian piece of legislation lawmakers said was intended to prevent transgender people from trolling public restrooms intent on voyeurism, rape, and sexual harassment.

The fact that no single example of such things happening in the state existed, the legislature stuck to its guns, helping to shape the perception that North Carolina is one of the most bigoted places in America — a dubious distinction but one the state’s Republicans are inordinately proud of.

Wait Until The Situation Is Catastrophic

North Carolina now has a Democratic governor, Roy Cooper, who has made the state part of the US Climate Alliance, a group of states which have pledged to reduce greenhouse gas emissions in keeping with the Paris climate accord. Nevertheless, The Guardianreports Orrin Pilkey, a retired Duke University coastal geologist, wrote recently North Carolina has failed to take the same steps to protect its coastal areas that Virginia and New Jersey have taken.

“Instead, coastal development flourishes as more beachfront buildings, highways, and bridges are built to ease access to our beautiful beaches,” he wrote. “Currently the unspoken plan is to wait until the situation is catastrophic and then respond.” That could describe the climate change plan of all Republicans, which means all Americans will be damned to a response that is too little too late.

The Storm Of A Lifetime

The National Weather Service calls Florence “the storm of a lifetime.” Donald Trump, exhibiting all of his intellectual gifts, has warned it will be “tremendously wet.” Florence is already the first major hurricane to make its first US landfall so far north.

“Florence developed further north and east in the Atlantic than you’d expect for a storm that reaches the US,” Chris Davis, senior scientist at the US National Center for Atmospheric Research tells The Guardian. “Storms like that don’t usually make it that far west. But it’s moving at a steady clip and bearing down on some pretty vulnerable parts of North Carolina.” There are two more storms developing in the Atlantic that are expected to follow much the same path as Florence.

Dr Kelly McCusker, a climate scientist at the independent economic research firm Rhodium Group, is one of the wild-eyed radicals promoting the climate change conspiracy theory. “The primary fuel for hurricanes is a warm sea surface, which is getting warmer with climate change. While we can’t attribute this hurricane solely to climate change, we do expect these types of intense hurricanes to happen more often as the world warms.”

How dare Dr. McCusker make such outrageous statements! There ought to be a law against such radical pronouncements and if the solons in the North Carolina legislature have anything to say about it, there soon will be.

Isaac Ginis, a hurricane expert at the University of Rhode Island’s Graduate School of Oceanography, is another foaming at the mouth who says such wild things that nobody with a lick of sense would believe him. He says with rising temperatures, hurricanes are likely to become more intense, bring more rain, and pose more risks to coastal areas from higher seas and bigger storm surges and waves. Such despicable lies should be banned.

Florence is expected to create a 13-foot storm surge along the Atlantic coast and bring up to 3 feet of rain to inland areas. That will depend on whether the storm stalls and remains stationary over the area for an extended period of time or continues moving away from the coast. Here is a video of what it is like to fly through one of the most powerful storms in history.

The potential for environmental disasters resulting from the storm are high. There are 16 nuclear reactors in the area where Florence is supposed to hit, some of them that use the same design as the Fukushima reactor in Japan. In addition, there are millions of gallons of hog excrement in lagoons in the path of the storm, dozens of toxic waste sites, and a number of coal ash pits. If any or all of the contents of those facilities get into a public water supply, a full scale disaster will be in the offing.

“This one is pretty scary,” says Jamie Kruse, director of the Center for Natural Hazards Research at East Carolina University. “The environmental impacts will be from concentrated animal feeding operations and coal ash pits. Until the system gets flushed out, there’s going to be a lot of junk in the water.”

Of course, all those slop ponds, coal ash pits, and nuclear reactors are the beneficiaries of that “wait until the situation is catastrophic and then respond” syndrome Orrin Pilkey warns us about. Measures that could have been taken to improve the security at those facilities have been ignored or watered down by legislators anxious to please their largest campaign contributors. Now it may be time to pay the piper.

Conservatives Will Look To Feds To Pay

Speaking of paying, climate deniers also tend to be small government adherents who loathe the big, bad federal government and take every opportunity to belabor it for “government overreach” and spending money unwisely. Those rabid Republicans never miss an opportunity to rail against government giveaways to undeserving slackers who are too lazy to provide for themselves. They proclaim loud and long that government programs make people weak and dependent.

How long do you think it will be before the governors and Congressional representatives start demanding Uncle Sugar pay to clean up the mess they helped create? Is there anything more insulting than hypocrites who talk out of both sides of their mouth whenever it suits their purpose?

When considering what it means to be an avowed climate denier in a world where warning signs of imminent danger are everywhere, we have to think of the apocryphal story of the man whose home is about to be flooded. A neighbor stops his car and invites him to ride along to safety. The man declines. “My God will protect me,” he proclaims. Later, as the waters are rising, a man in a boat comes by and offers to ferry him to safety. Again, he declines, saying, “My God will protect me.”

At last, the man is on the top of his roof as the waters threaten to close over his house. A Coast Guard helicopter offers to rescue him but he refuses. “My God will protect me,” he screams into the wind. A few minutes later, he drowns.

In Heaven, he comes face to face with God and castigates Him for letting him perish in the flood. “I believed in you all my life and when I needed you, you abandoned me,” he says. “But,” says God, ” I sent you a car, a boat, and a helicopter. What more did you expect from me?”

When it comes to addressing climate change, the waters really are rising. Failing to recognize the signs that are all around us is an act of willful self delusion that puts the entire human race and all living creatures at risk. There is a point at which belief just becomes a willful blindness to reality. That point is upon us now as Florence crashes ashore after its journey across an overheated Atlantic. 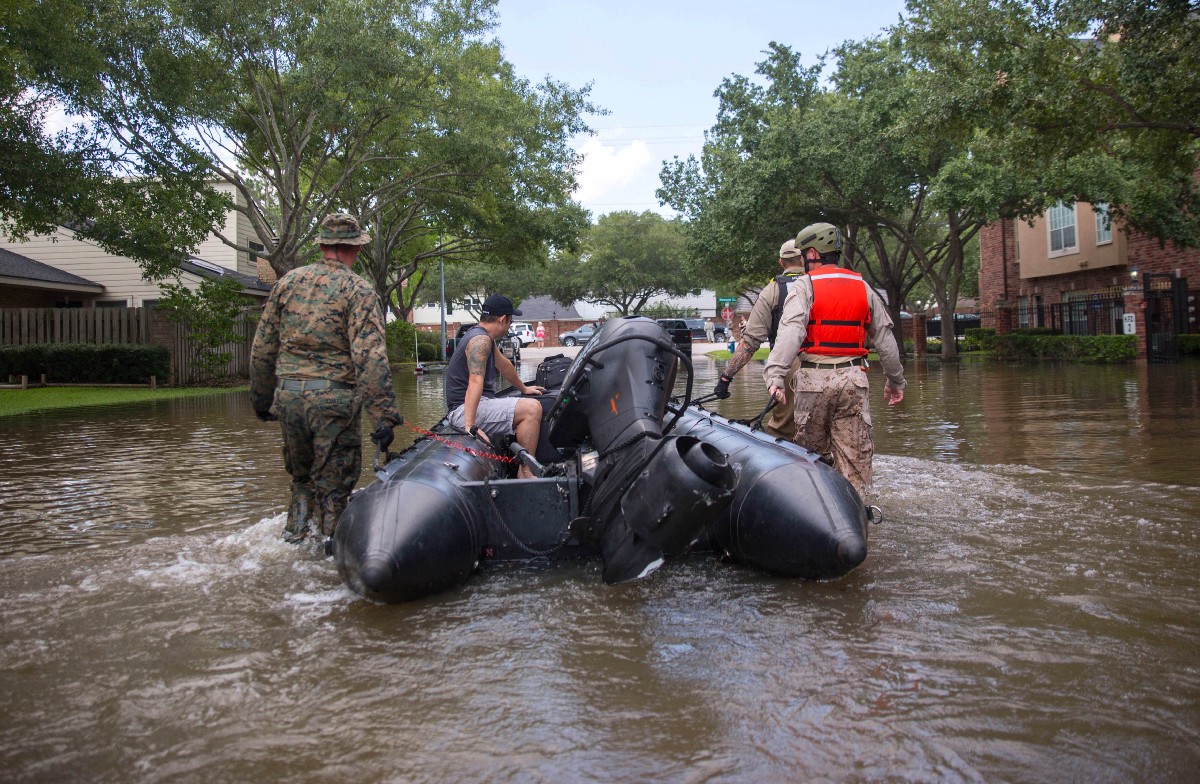 As Hurricane Florence bears down on NC, a reminder: Harvey spread disease

Evangelicals call for climate action in the wake of Hurricane Harvey 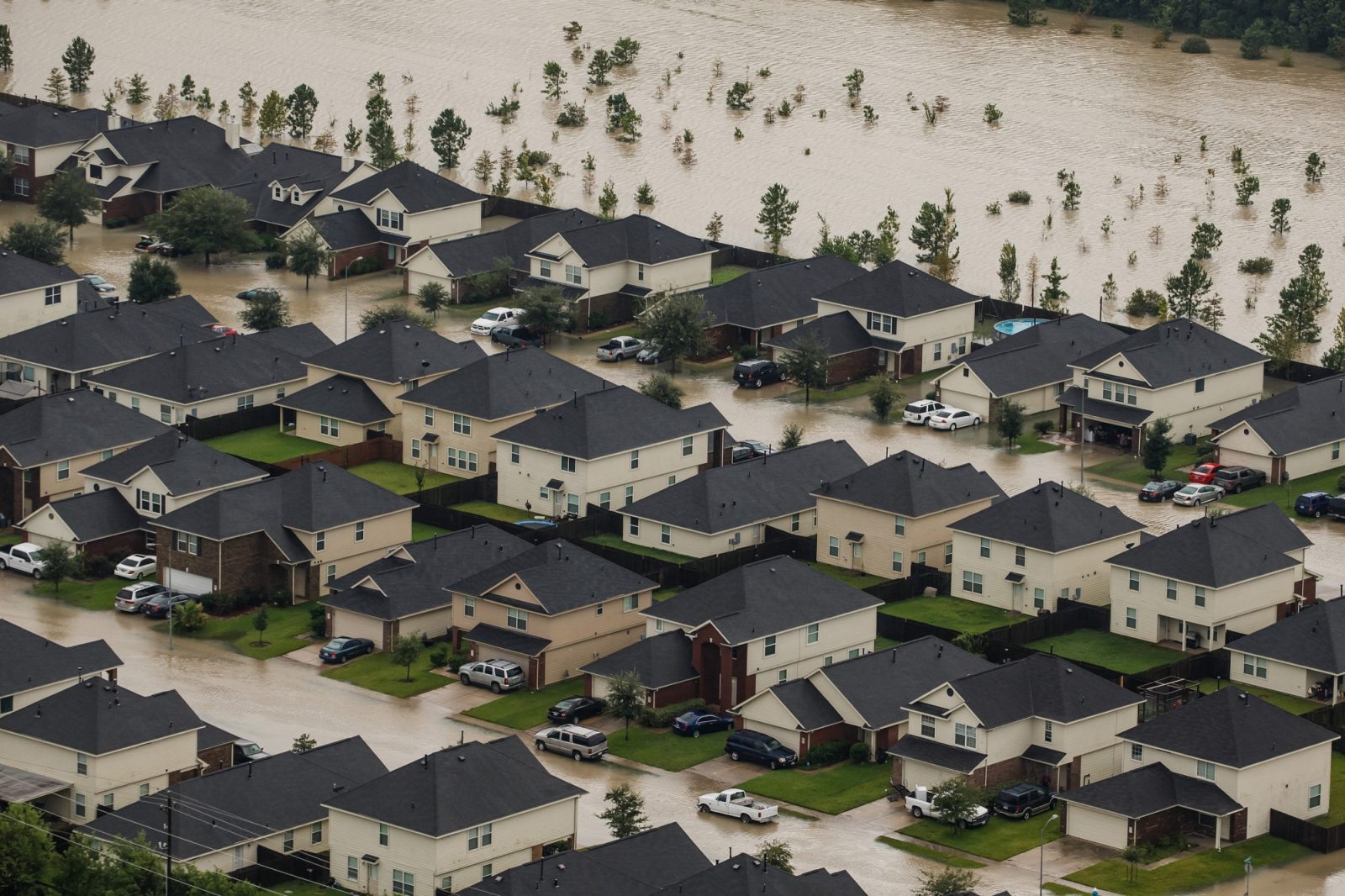