If you’ve turned on Fox News, glanced at Breitbart, or read WSJ editorials or a Bret Stephens column lately, odds are you’ve heard of the “Yellow Vest” protests in France. In short, people who rely on gas are angry at a planned hike in already high gas prices as part of Macron’s broader agenda perceived as favoring the rich. Even though French President Macron agreed to hold off on a tax increase for 6 months, the problem appears far from solved.

But the essence of the Yellow Vest protesters’ complaints – that the working class shouldn’t be punished while the upper class elites profit – is hardly the sort of thing you’d expect conservative media to amplify.

But because the conflict allows folks like Koch boy Mike Bastasch at the Daily Caller to run headlines saying “Macron waves the white flag on carbon taxes”, they’ve embraced the rioting as evidence that climate policies are unpopular. (And for reference, the increase would correspond to a $400/ton price of carbon, while in the US the proposals are more like $40/ton.)

That’s not to say, though, that the people marching in France are left-wing protesters. Really, they’re just angry. As Buzzfeed news explores, the Yellow Vest protests appear to have arisen organically on Facebook, seemingly as a result of how changes to Facebook’s algorithm now make it prioritize local content. Over the course of 2018, a variety of “Anger Groups” have sprung up across France, particularly in rural and suburban areas. Buzzfeed reports that these groups generally focus on local issues, but often infuse the bizarre, paranoid conspiracy-theory bent that has become emblematic of the platform.

For example, one of the Yellow Vest movement’s leaders is a chemtrail truther. One of the Facebook groups in support of the protests shared a picture from a traffic jam in China in 2010, calling it a current gas tax protest in Germany. Another group has the mission of fighting the Masonic bankers ruling France. (Because while the algorithm changes were a reaction to the proliferation of fake news and propaganda that have made the website a democracy-destroying hellscape, there doesn’t seem to be anything Facebook can do to keep people from using it to say and spread dumb conspiracies or hateful and violent threats against immigrants and minorities.)

But that’s not to say that the Yellow Vest protesters are all similarly silly or unjustified or hateful. The truth is, France’s carbon tax and the impact on fossil fuel prices are causing people significant pain. However, that doesn’t mean putting a price on carbon is a bad policy, it just means it can’t be instituted without a broader suite of policies that otherwise protect and help those who are feeling the pain of higher fuel prices.

This isn’t new: remember the study back in August about how a global price on carbon, if instituted alone, would be bad? Right. It’s a necessary part of fighting climate change, but it’s not sufficient by itself.

As WWF-France’s head of climate and energy told Reuters, Macron’s tax “put the cart before the horse by not addressing the social measures necessary for a just transition.”

Or as Wesleyan University economist Gary Yohe told the AP:

“Is it a death knell for the carbon tax or pricing carbon? I don’t think so. It is just a call for being a little bit more careful about how you design the damn thing.”

And what could a more careful design look like? Probably a little something like the Green New Deal, which as the Sunrise Movement describes to Gothamist, would incorporate a labor component specifically to account for the sort of working class reaction we’re seeing in France. As Sunrise’s Aracely Jimenez-Hudis put it, the “goal is to stop climate change while creating  millions of good jobs in the process.”

Taking it even further, Kate Aronoff at the Intercept describes what a future in which the Green New Deal passes might look like. The short version: a world where we’ve instituted a price on carbon, but also enough social programs to protect those vulnerable to the impacts of climate change as well as those vulnerable to the impacts of a carbon tax.

And as Rob Meyer at the Atlantic explains, the Green New Deal also provides Democrats with a policy to rally behind, while giving voters tangible benefits that would make it difficult to repeal.

The answer, then, to Bret Stephens and others questioning what the Yellow Vests means for climate policy is not that there should be less of it, but in fact much, much more.

Chuck Schumer: No deal on infrastructure without addressing climate change

Trump EPA acts to roll back control on climate-changing coal

For the first time, a major US utility has committed to 100% clean energy

Greenland’s ice sheet melt has ‘gone into overdrive’ and is now ‘off the charts’ | the melt rate over the past two decades was 33 percent higher than the 20th-century average, and 50 percent higher than in the pre-industrial era before the mid-1800s.

(Crossposted from DailyKos. Photo CC on Flickr by NightFlightToVenus) 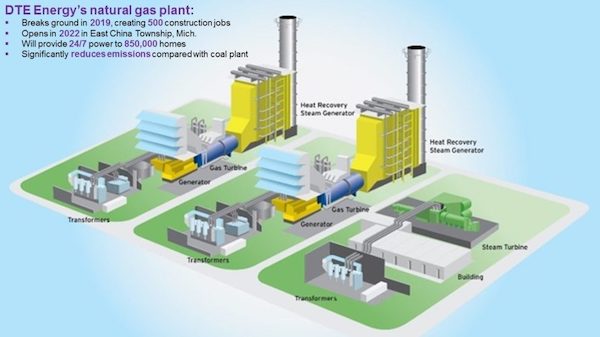