Climate change lawsuit: ExxonMobil fought all the way to the Supreme Court – and lost.

The Attorneys General of New York and Massachusetts have filed suit against ExxonMobil, alleging it has repeatedly lied to the public and its shareholders about the harm done by its business operations to the environment. The suits arose out of reporting by Inside Climate News and the Los Angeles Times in 2015 that found the company was aware of the risks of global warming from carbon emissions as far back as the 1980s but went to extraordinary lengths to conceal that information.

Both Attorneys General want to know what ExxonMobil knew and when it did know it. In April, 2016, Massachusetts AG Maura Healey issued what is known as a civil investigative demand to the company for records relating to the controversy. For all intents and purposes, that demand is equivalent to a subpoena. The company responded by claiming Massachusetts has no legal authority over it because it is incorporated in other states.

In April of this year, the Massachusetts Supreme Court ruled the company is indeed subject to the laws of Massachusetts because it conducts extensive business operations within the state. Maura Healey’s office made a jubilant statement to the press after that decision.

“For the second time this month, Exxon’s scorched earth campaign to block our investigation has been entirely rejected by the courts. In its decision today, our state’s highest court affirmed that Exxon is subject to our laws, and that our office has the authority to investigate. Now Exxon must come forward with the truth, what it knew about climate change, when, and what it told the world. The people of Massachusetts – and people everywhere – deserve answers.”

ExxonMobil filed an appeal of the Massachusetts decision with the US Supreme Court. Under federal law, hearing such an appeal is discretionary. The US Supreme Court can decide whether to hear the case or not. On January 7, the court declined to hear the appeal, according to Reuters. The result of the court’s decision not to accept the appeal is that the civil investigative demand must now be complied with, which got a celebratory tweet from Healey.

Today’s #SCOTUS victory clears the way for our office to investigate Exxon’s conduct toward consumers and investors. The public deserves answers from this company about what it knew about the impacts of burning fossil fuels, and when. https://t.co/BljXQzcY49

In a comment e-mailed to CleanTechnica, Carroll Moffett, head of the Center for International Environmental Law, had this to say:

“Exxon has fought this investigation all the way to the Supreme Court and has lost at every stage. Today’s decision means Exxon is out of options and out of time in its fight to keep these documents from public light.

“The millions of pages of documents Exxon was compelled to turn over in the New York investigation evidenced widespread malfeasance reaching the highest levels of the company, and they led the New York Attorney General to sue the company on multiple counts of securities fraud.

“The Massachusetts investigation poses an even bigger risk for the company because the pool of Exxon’s potential victims includes not only seven million citizens and consumers in Massachusetts, but also untold tens of millions more living in states with nearly identical consumer protection laws.

“For the past three years, Exxon and other big oil companies have deployed every conceivable procedural maneuver to block these investigations and the ensuing litigation from moving to the merits. Today’s decision is the latest evidence that this strategy is doomed to fail.”

Thanu Yakupitiyage, communications manager for 350.org, told EcoWatch, “This latest decision brings great momentum in the fight to hold fossil fuel companies accountable for causing the climate crisis. We thank Attorney General Healey for her vigilant leadership in standing up for people over polluters.”

ExxonMobil is facing legal jeopardy in New York as well, where Attorney General Barbara Underwood sued the company last October for defrauding shareholders and lying about the risk of climate change associated with its business.

The suit alleges a fraudulent scheme to “systematically and repeatedly deceive investors about the significant impact that future climate change regulations could have on the company’s assets and value,” says EcoWatch. The fraud reached the highest levels of the company, including former chairman and CEO Rex Tillerson, who was US Secretary of State briefly before being thrown overboard by the alleged president.

So what happens now? ExxonMobil will slow walk the release of documents as only a group of $1,000 an hour attorneys can do. It will fight, it will feint, it will twist and turn itself into a pretzel to avoid having its innermost secrets made public. Healey and Underwood will have to go to court multiple times to force the company to comply and the lawyers will appeal every decision. Why?

Every lawyer knows that delay benefits one of the parties to every lawsuit. Every day the company can delay this process is another day it can continue to rape the Earth in pursuit of profits. Over time, politicians and judges change. Maybe it will get a better deal in the future. Maybe it can spend billions trying to elect people more sympathetic to its position. In the meantime, it will continue to pump oil as fast as it can find it on the misguided basis that it owes nothing less to its stockholders.

ExxonMobil was not always evil. In fact, it may have done the preliminary engineering that led to the Toyota Prius, the world’s first mass produced hybrid car. But then in the early 1980s, something changed. The company’s research facility in New Jersey was abruptly closed as the company closed its doors to outside influences so it could concentrate exclusively on its oil business.

As a writer I hold in the highest esteem said in the 2016 story for Gas2 referenced above, “But for those decisions in the boardroom, Exxon could have been then what Tesla Motors is today — a vibrant, exciting place to work and a company at the cutting edge of change in the world of transportation. Exxon chose to put profits ahead of people, a decision that could come back to haunt it as it faces civil and criminal legal actions in the courts.” I couldn’t have said it better myself. 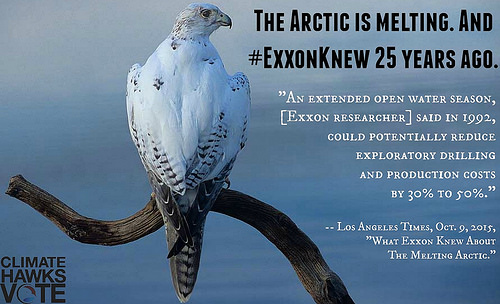