Another leisurely train trip for North Korea’s Dear Leader. More incoherent blather from the Best Dealmaker Ever. Nuclear summit cut short. No ceremonial signing of an agreement because no agreement. If you were hoping somehow to wangle one of the pens used to sign that historic document, sorry, you’re out of luck.

You’re also out of luck if you thought maybe this failure would tamp down Trump’s praise for Kim. In a press conference before he clambered onto Air Force One for the long ride home, he was asked if he had discussed with Kim the case of Otto Warmbier, the American college student taken captive by North Korea who died of fatal injuries in 2017 soon after he was freed into U.S. custody. Trump said he didn’t think Kim or other top officials knew about Warmbier until after the damage was done. Trump said, “He tells me he didn’t know about it and I take him at his word.” Just like Mohammed bin Salman’s word, eh?

Are Kim and Trump just punking us all and having these summits so they can gorge themselves on the local cuisine in Asian capitals? First Singapore, then Hanoi, maybe next time it’ll be Kuala Lumpur or Bangkok or Manila.

Seriously, given what appears to have been accomplished in Vietnam, couldn’t these guys have just texted each other?

"I don't believe that he would have allowed that to happen." https://t.co/8awgSJJzVM pic.twitter.com/HvL0JYbvQh

The pre-summit hype and what-a-great-guy flattery Trump slathered on Kim in the run-up to the meeting in Hanoi gave the impression this trip was going to produce the much-promised agreement that would eliminate Pyongyang’s nuclear arsenal and capacity for rebuilding it in return for the lifting of sanctions to allow the North to transform itself from impoverished tyranny into the “economic powerhouse” Trump says it can be.

But, as it turns out, while Kim claims to be sold on the concept of denuclearization, he’s not so keen on the actual process. He wants to retain elements of the nuclear program, including some covert parts, as well as his missiles and nuclear warheads, in exchange for which the U.S. will end all sanctions. Desperate as he is for good news to offset the searing testimony of the guy he calls a “rat” and who calls him a “racist” and a “con man,” even Trump knows he couldn’t sell Kim’s conditions to the most adoring of his base. “Sometimes you have to walk, and this was just one of those times,” he said.

But why didn’t he and the rest of the delegation know this would be what was on offer from Kim?

Usually, before a summit is announced and the big dogs are called in to sign an agreement, the diplomats have worked out most of the details, or at least have a good idea where any remaining sticking points are likely to be and have game plans for dealing with them. Shouldn’t they have known and conveyed to the White House that Kim wanted all the economic sanctions gone but without surrendering all the elements of Pyongyang’s nuclear capabilities?

It’s certainly no secret that North Korea’s nukes are what’s given Kim his international cachet. He’s now a player. Giving up those weapons would make him a footnote. And also, from his and other North Korean leaders’ perspective, that would again put him at risk of attack from the United States.

Kim will remain in Hanoi until Friday, when he will board the train for home, with a stopover in Beijing to have a chat with President Xi Jinping.

The lack of a deal sets up China to play a larger role in a process that some believed Beijing was at risk of being sidelined. Mintaro Oba, a former diplomat focused on the Koreas said China has an opportunity to step in and set the tone.

“China can make an impact by showing continued public support for North Korea — or alternately, putting pressure on North Korea to be more flexible if Beijing thinks North Korea was the primary reason the summit ended with no agreement,” Oba said. “China will not want to see this diplomatic process fall apart.”

At a regular press briefing after the summit was cut short, Chinese foreign ministry spokesman Lu Kang said a resolution on the Korean peninsula could not be “achieved overnight”. Lu said China was willing to “continue to play a constructive role” and hoped dialogue between the US and China would continue.

The Asian stock markets flickered over the news of the summit’s abrupt end without an agreement, those in South Korea and Japan taking substantial hits. For President Moon Jae-in of South Korea, the failure of the talks has thrown a wrench in the works. He had planned to announce four proposals for enhanced engagement between North and South on the 100th anniversary of Korean independence, which is Friday. The lack of an agreement between Washington and Pyongyang almost certainly will mean limited progress in further engagement between the two Koreas, if there’s any at all.

The South Korean presidential office released a statement: “We do feel regret that President Trump and Chairman Kim Jong-un could not reach complete agreement at today’s summit. But it also appears that they have clearly made more meaningful progress than at any time in the past.”

An unnamed South Korean diplomat told the Guardian’s Julian Borger:  “It was a shock. We are trying to figure out what happened.”

(Crossposted with DailyKos. Cartoon CC by DonkeyHotey at Flickr.) 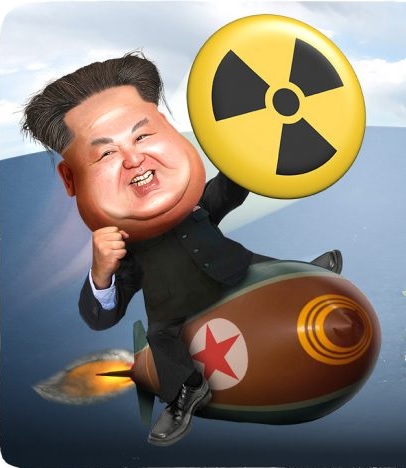 North Korean Nukes: Has Trump already rolled over for Kim just so he can have a “win”?