On Monday, the city of Honolulu, Hawaii filed a lawsuit against eight major oil companies: Aloha Petroleum, BHP Group, BP, Chevron, ConocoPhillips, ExxonMobil, Marathon Oil, and Shell. This lawsuit, like others, alleges that Big Oil “had actual knowledge that their products were defective and dangerous and were and are causing and contributing to the nuisance complained of, and acted with conscious disregard for the probable dangerous consequences of their conduct’s and products’ foreseeable impact upon the rights of others, including the City and its residents.”

With flooding already regularly impacting businesses, and sea level rise posing an additional $19 billion in costs to the city if/when seas rise by 3 feet, and threatening to flood the houses of 20,000 people, someone is going to have to pay for the damages. As Honolulu Mayor Kirk Caldwell said in a statement: “The people of Oahu and people everywhere deserve to see that a portion of the massive profits these corporations have raked in now help pay for the damages that they have caused to our island.”

The fossil fuel industry, of course, does not think it should be the one to clean up the mess it made. And judging by companies’ responses, they think they’ve already won because of other cases ruled in their favor.

At least that’s the sense one gets from reading a recent op-ed at InsideSources by Curt Levy, claiming that the climate lawsuits are “beginning to collapse like dominoes.” (He was new to us, so we looked him up and it turns out that Levy is the kind of guy who bragged about his role in getting a key part of the Violence Against Women Act overturned in what he described as “a historic setback for feminist advocacy groups,” suggested that Obama nominating more judges of color means they might just be “lowering their standards,” and appeared on a rabidly homophobic radio host’s program.)

The central claim to Levy’s piece (reposted by various deniers) is that climate litigation suits have been struck down so Honolulu’s suit is doomed to failure. In what is surely just a coincidence, it is also core to Big Oil’s pushback, as Energy In Depth’s post responding to the Honolulu suit demonstrates. While it is true that the NYC case, the first big suit to take the industry on, was unsuccessful, that’s hardly game over. After all, it took some 800 cases over 40 years for the tobacco industry to finally be held accountable. It’s probably a little premature to claim that one or two losses means that the litigation effort has failed.

After the just transparently desperate and deceptive argument that these cases are destined to fail, EiD also argues that Hawaii needs fossil fuels for its tourism industry, that it will somehow cost taxpayers money to hold the industry accountable, and that there are better ways to address climate change.

That’s the line that the National Association of Manufacturers has been taking. Industry rep Phil Goldberg’s statement on the Honolulu suit starts with the assertion that “these lawsuits have nothing to do with fighting climate change.” Weird…that’s actually what litigants have been arguing, and ExxonMobil has been opposing.

Goldberg might want to check in with ExxonMobil’s lawyers who have been pushing to have these cases moved from local to federal courts. On the other hand, litigants have been arguing exactly what Goldberg says: that these cases aren’t about fighting climate change (but instead about recovering costs). If the suits were about climate change regulations, ExxonMobil’s lawyers would be right that the cases should be moved to federal courts. If they aren’t about fighting climate change, as Goldberg says, then they belong in state courts that handle tort lawsuits.

Oddly, it seems EiD hasn’t gotten the memo either. The EiD post ends with a reference to a CNN story from 2009 about Hawaiians taking matters into their own hands to repair a flooded-out road. Like supposedly feel-good stories about students raising money to pay off their friends’ lunch-loan debts, this is a clear example of people making the best out of a system that’s failing, not a shining example of things working as they should.

People shouldn’t have to band together to clean up the oil industry’s billion-dollar messes. The industry spent decades with the understanding that the use of its product would cause the seas to rise. Instead of warning the public about this (inevitable) possibility, it did the opposite and funded groups like EiD and NAM to tell us that there’s nothing to worry about.

But as the cost of climate impacts rise, so too does the likelihood that one of these cases will eventually win.

And when that happens, well, Aloha accountability and massive fines, and aloha to organized denial!

The Political Realignment From Hell | Trump’s coronavirus response stimulus package would bail out big oil. Biden-style Democrats will decry the cost. The planet will suffer.

Carbon pricing represents the best answer to our climate danger

Climate change is disrupting life for millions, a report finds

The coronavirus emergency should make us act on the climate crisis – This trauma will probably be temporary. The effects of climate change will be long-lasting. 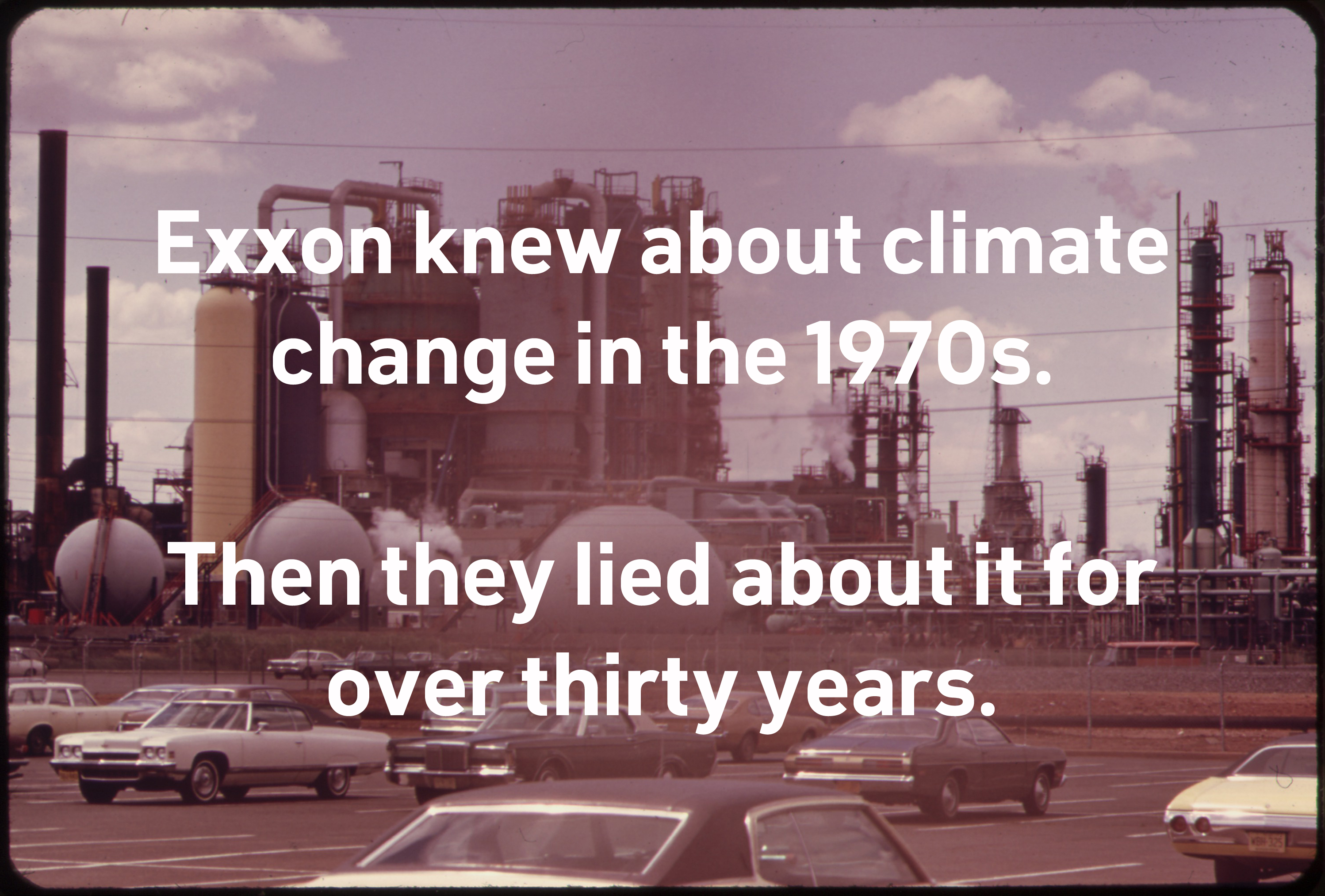