There is a name for avoiding certain issues in politics: avoiding the “third rail.” The theory is that if you touch this highly charged rail it will kill your political career. Clean energy and climate issues got that “third rail” tag during the 2010 election but the facts and the polls tell a very different story.Senator Reid ignored the risk of clean energy being a “third rail”. He was one of the most endangered incumbents in the nation in 2010. To win, he focused on job growth with a specific emphasis on the jobs in the renewable energy sector. In fact, the very first ad produced by the campaign focused on clean energy. Brandon Hall, his campaign manager said, “Clean energy was our #1 issue in terms of a positive reason to vote for Harry Reid. It was huge with Independents – it was the #1 issue. We used it in everything we did.”

Why did it work? Clean energy is a winner across the board:

Too easily members running for office are afraid of well-funded opposition creating the “third rail”. In 2010, Texas oil companies helped fund a California ballot initiative to roll back the state’s landmark clean energy and climate law. They spent millions of dollars trying to charge that rail.With California suffering the second highest unemployment rate in the nation, the oil companies claimed their ballot initiative (Proposition 23) would support job growth. Data quickly revealed that keeping families safe from air pollution was a top priority — and when voters learned that Proposition 23 would lead to dirtier skies, they opposed it. Californians defeated Prop 23 by a ratio of 2 to 1 on Election Day. In fact, the defeat of Proposition 23 gained more support than everything else on the ballot, including the gubernatorial and Senate races.

Two thousand miles away in Northwest Ohio, there have been mass layoffs and everywhere you look there are empty industrial facilities. Representative Betty Sutton (OH-13-D) used clean energy to paint a hopeful future for her district saying, “We have a lot of things going on in the development of alternative and new energy that is going to be powered by American workers … we have examples to present to people. We see work happening to sort of break down those fears that we have in my district.”

Clean energy is building a new economy based on the spirit of American innovation. It will create new job opportunities, reduce our dependence on oil and protect us from pollution that threatens our health and contributes to climate change. Voters understand this – and they’re supporting elected officials who share that vision.

The strength behind the clean energy economy is so clear that it’s no longer a Democratic, Republican, or an Independent issue. Lori Weigel, a Republican strategist and pollster with Public Opinion Strategies states, “What we are seeing consistently is support for renewable energy. We ought to be doing more. Voters’ support of a Renewable Electricity Standard is 65%, across the partisan spectrum. They are coming at this from a very positive view of renewable energy.”

Clean energy represents an incredible opportunity for candidates and the communities they hope to represent. Across the country, candidates successfully used it in their campaigns, and have won. It is the best of American values, such as innovation and entrepreneurship. Candidates will be successful when they take this message forward, whether celebrating a new battery research facility in Ohio, watching a new wind turbine turn powerfully against a Texan sky, or standing with the families who breathe cleaner air.

Find out more about running on clean energy at runningclean.org 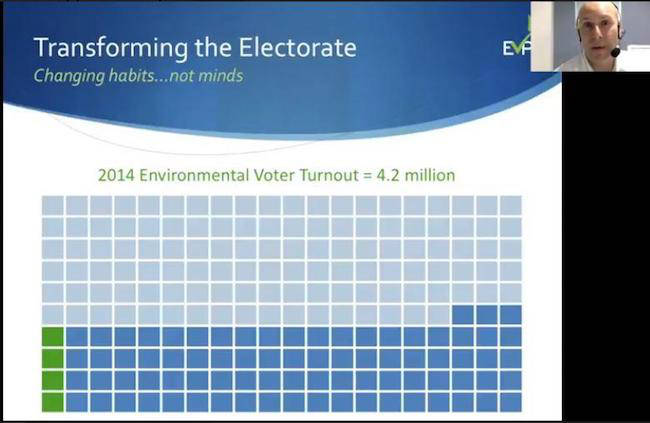 Majority of Americans want climate change action (so why are politicians foot-dragging?)