CCL has put out three studies that have been very useful for our advocates: REMI, Household Impacts, and Dividend Delivery.Encouragingly, our studies aren’t the only ones finding those benefits. Completely independent work arrives at similar conclusions.

A project referred to as Energy Modeling Forum (EMF) 32, is just such independent work. Sponsored by Stanford University, this effort recently produced 15 peer reviewed articles on the economic and emissions reduction impacts of various revenue neutral carbon tax (RNCT) scenarios. The articles reflected analyses from 11 different climate economic modeling groups that evaluated the same set of policies (1) not too dissimilar from CCL’s proposal. These articles made up the entire February 2018 issue of the Climate Change Economics journal.

This work is of interest to CCL volunteers because it reflects a significant contribution to the study of the implications of a RNCT and will be considered authoritative by key audiences involved in the climate discussion, such as Congress and the various proponents and opponents of a RNCT. This post will describe pertinent conclusions of the work and how it relates to CCL’s policy and our analysis of it, such as REMI.

A primary objective of this compilation was to observe, with 11 different models evaluating the same policies, whether general conclusions might be drawn on the impacts of a RNCT.  The authors found there were several key overarching results:

The authors are clear that this type of modeling process does have its limitations—see Policy Insights from the EMF 32 Study on US Carbon Tax Scenarios (Policy Insights), pages 5-9 and 15-17, and the discussion below.

EMF 32 implies a RNCT would reduce GDP slightly, while REMI shows a slight increase in both GDP and employment from the CCL policy. Can we reconcile the two sets of results? The authors state that there is insufficient empirical evidence as to the effects of a significant carbon price on economic activity, so probably not. We do know British Columbia has grown faster than the rest of Canada since the inception of its RNCT. Below are insights as to what the EMF model results do and do not say about likely economic impacts from a RNCT.

The RNCT policies modeled differ from the CCL policy in a critical respect: they do not include a full Border Carbon Adjustment. The authors appear to believe a BCA would enhance the economic results and state, “As such, the results here are far closer to a ‘worst-case’ scenario than a likely outcome” (Policy Insights, p. 36). REMI’s inclusion of a BCA and its treatment of trade likely explains most of the difference in economic outcomes between the EMF 32 analysis and the REMI report. EMF authors hope to include a full BCA in future studies.

Other areas of ongoing research that, once addressed, might reasonably be expected to lead to more positive results include assumptions about employment, innovation, and investment. Currently, all models in the EMF32 project assume full employment, do not assume that a carbon tax would spur innovation, and do not include any surge of investment induced by the carbon tax. Each of these things might reasonably be expected to bring results closer to a “double dividend,” where emissions are reduced and the economy grows. But at present, they are phenomena understood too poorly to include in modeling.

In sum, the EMF 32 models indicate GDP could decline slightly as a result of a RNCT, though this may reflect more of a worst case scenario, and there is some reason to believe the right policy would stimulate economic activity. At CCL, we are comfortable with the REMI results that show growth in job and GDP from our policy, and we’re confident in continuing to work for strong CF&D legislation.

The Economics Policy Network is a team of CCL leaders and supporters with a diverse background in the field of climate science. These network contributors write regular guest posts, offering thorough insight into topics that fall within their expertise. Their resources are available in the form of white papers on CCL Community.

Widening the circle: CCL’s take on Americans for Carbon Dividends 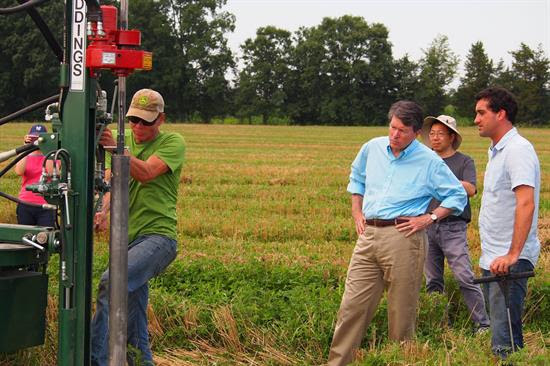 Farmers can be profitable AND sequester carbon to help climate change