The science behind the polar vortex: You might want to put on a sweater

Editor’s note: This post from last winter is getting a lot of fresh attention thanks to its appearance somewhere in the Google news feed last week. Although the details of the state of the tropospheric and stratospheric vortexes in this post are from last year, the explanation of the basic science of these atmospheric features is still solid. Come back and visit us on January 28 for an update on the current state of the polar vortex and how the Sudden Stratospheric Warming event that happened in early January may influence mid-latitude weather in coming weeks.

Six years ago, “polar vortex” became the latest weather term to enter the public conversation; since then, it’s been blamed—sometimes rightly, sometimes wrongly—for every outbreak of wintry weather. Because I’m generally considered an ENSO expert, I’m inviting along some of my polar vortex friends to chaperone* our walk.

So, let’s start with a quiz. When you read/hear “The Polar Vortex is here!” you should:

The answer is (c), but, hey, if you really want to pick the other two options, we’re not going to stop you.

If you’re a meteorologist hearing the term, you would also grumble a bit at that headline because the polar vortex doesn’t come and go. It’s not “here” because it’s always there in our atmosphere, spinning around the winter hemispheres (Footnote #1).

Look up as you walk. Way up.

Illustration of the tropospheric and stratospheric polar vortexes across the Northern Hemisphere. The arrows show the direction of the atmospheric winds, which typically blow from west to east in the mid-latitudes. Schematic is by NOAA Climate.gov and is adapted from Waugh et al., 2017, Bulletin of the American Meteorological Society.

Darryn Waugh and colleagues did a great job covering the history of the polar vortex in this article from a couple years ago. In it, they point out that although knowledge of a stratospheric vortex extends back to the late 1940s, it was later on (1970s to 2000s) that the term “polar vortex” was more frequently used to describe weather closer to the surface. This is why they recommend that folks refer to the tropospheric polar vortex or the stratospheric polar vortex. These vortexes are different!

They’re different, but there are times when the two polar vortexes are in similar positions and are more strongly linked. Let me explain how the troposphere and stratosphere are different, and then we’ll talk about those special times.

In the troposphere: the low road

Weather in the troposphere can be a bit messy, but colder air tends to be relegated closer to the pole while warmer air resides in the Tropics. Between them are the middle (mid-) latitudes, where warmer and colder air often clash and do battle. It’s quite uncomfortable going from 70°F one day to 30°F the next, so we forgive you for wanting to yell “polar vortex!” because yikes! [but please don’t] However, the rapid changes in temperature can simply be described by the passage of a weather front, a sharp boundary between different air masses.

Thus, the tropospheric polar vortex is a slightly wordier way to describe the separation between the generally colder air to the north and the warmer air to the south. The edge of the vortex is characterized by a jet stream or river of fast flowing air that separates the air masses. The jet appears very sinuous on the map below (red/purple shading indicates the fastest winds) and sort of looks like a snake slithering around the hemisphere. (That analogy gave me the creeps too. Sorry!).

Winds blowing along the 500-hPa geopotential level on January 12, 2020 (on average this is 5.5 km or 3.5 miles above sea level and is within the troposphere). Image modified by NOAA Climate.gov using images from Earth Nullschool (data source: GDAS from NOAA).

When the tropospheric polar vortex expands, and the jet stream slides to the south, it will increase cold air outbreaks (Footnote #2). But the vortex can also contract, with the jet stream moving north, which means warmer weather where you live (we saw this happening over the U.S. and Eurasia during parts of December 2019 and January 2020).

In the stratosphere: the high road

Then there is the stratosphere, which most of the time could not care less about what is happening near the surface. The stratosphere is a quieter, generally much less exciting place than the troposphere. The stratospheric polar vortex edge is located where the strongest winds occur, another jet stream (a jet that is at much higher altitude) that sort of just hums along without the messy frontal clashes that happen in the troposphere. It’s kind of just chill with air flowing along in a more or less concentric circle around the pole.

Winds blowing along the 10-hPa geopotential level on January 12, 2020 (on average this is 30 km or 19 miles above sea level and is within the stratosphere). Image modified by NOAA Climate.gov using images from Earth Nullschool (data source: GDAS from NOAA).

Sometimes the stratospheric vortex is doing its own thing, whirling around, and then—all of a sudden—the troposphere might start whacking the stratosphere from below! Hey! Mind your own business, troposphere! That really hurts! (important caveat in Footnote #3)

These are also the times when scientists and forecasters start excitedly talking about the polar vortex to their friends. Mainly it’s because these events are highly disruptive to the planetary circulation and are times when the breakdown in the stratospheric vortex can weaken the tropospheric vortex. Amy Butler (@DrAHButler) has talked about this sort of phenomenon before on our blog, so check these posts (here and here) for a refresh.

Below is an image showing pressure departures averaged over the Arctic during a sudden warming event in early 2013. The red shading in early to mid-January 2013 is vertical, which indicates that a weaker vortex (and above-average pressures) extends all the way from the surface (bottom edge) through the stratosphere (top edge). Then, from mid-January onwards, the weaker vortex (red shading) descends from the stratosphere into the troposphere (the blue shading indicates lower pressures or where the vortex is stronger than normal).

Sudden Stratospheric Warming during January-March 2013. Image shows geopotential height anomalies, which is indicative of pressure differences over the Northern Hemisphere polar cap (averaged from 65°N to 90°N). Red shading is an indicator of higher-than-average pressure over the Arctic and blue shading indicates lower-than-average pressure. The x-axis shows the time evolution and the y-axis shows the pressure levels in hectopascal, hPa (Earth’s surface is located at the bottom of the image and the division between the stratosphere and troposphere is located around 250-300hPa).  Image courtesy of CPC Stratospheric monitoring with the data source from GDAS (NOAA).

Sudden Stratospheric Warmings and other instances when the stratospheric polar vortex weakens can influence the tropospheric circulation and increase the chances of cold air outbreaks over the middle latitudes (and warmer conditions near the Arctic). These surface impacts are not a given – climate forecasts are probabilistic for a reason. The variability from event to event can make it challenging to incorporate these impacts into forecasts (Footnote #4).

(1) Within this article I’m going to mostly focus on the polar vortexes that swirl around the Northern Hemisphere, but keep in mind there are polar vortexes in the Southern Hemisphere too, which speed around the southern oceans and Antarctica. The stratosphere and troposphere can only be coupled during the fall through spring (approximately October-April in the Northern Hemisphere). This is because the lower stratospheric flow is usually westerly (blowing from west to east) and therefore can be disturbed by waves propagating upwards from the troposphere. During the summer, the stratospheric polar vortex breaks down and winds are mostly easterly and therefore it isn’t sensitive to the troposphere.

(3) Emphasis on the sometimes. There is active research that is looking at whether an increase in (or “whack” from) anomalous tropospheric wave activity is required to instigate significant changes in the stratosphere. Other stratospheric conditions may be needed such as having a certain vortex geometry or internal resonance (de la Cámara et al., 2019). So it is also the case that an increase in tropospheric wave activity could sometimes be reflecting these stratospheric changes and not causing them.

(4) Sometimes a sudden stratospheric warming does not lead to a clear change in the tropospheric vortex (and exerts less of an influence on surface temperature). In fact, January-March 2019 is such a case (image here). The weakening of the polar vortex appeared to have trouble getting below ~200mb and into the troposphere. If you are curious and want to examine more sudden stratospheric warmings, check out Amy’s webpage where she and her colleagues document them through history

in favor of a more mild winter (December 2019- January 2020). In cases such as these, we gently suggest that you take off your sweater. 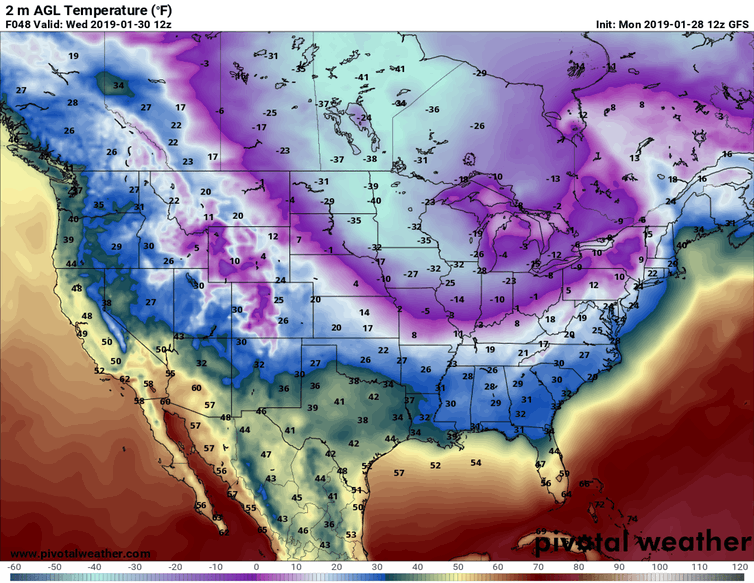 How frigid polar vortex blasts are connected to global warming 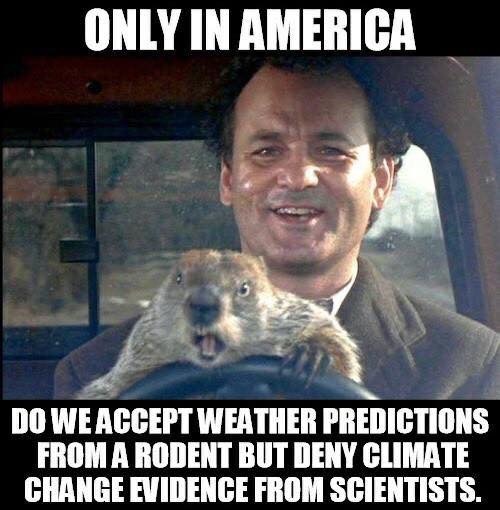 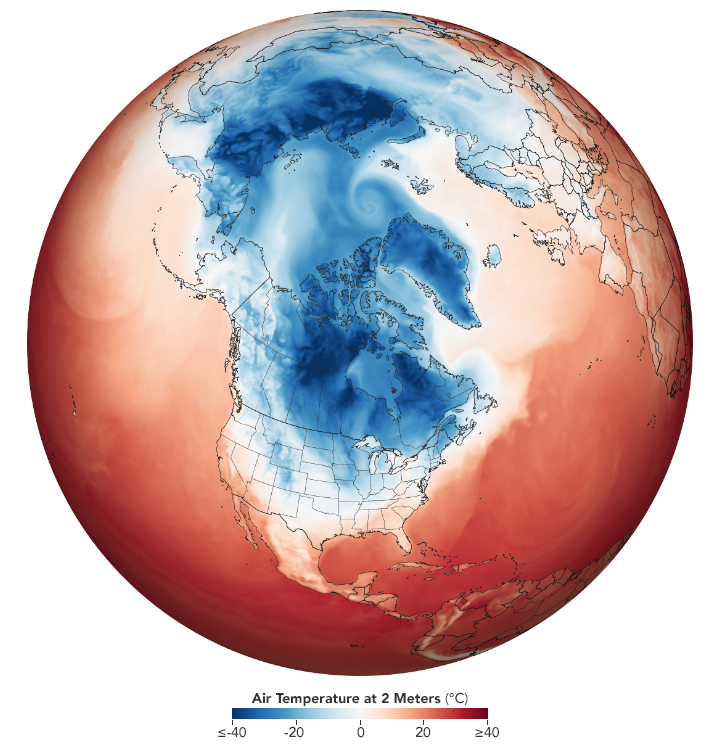 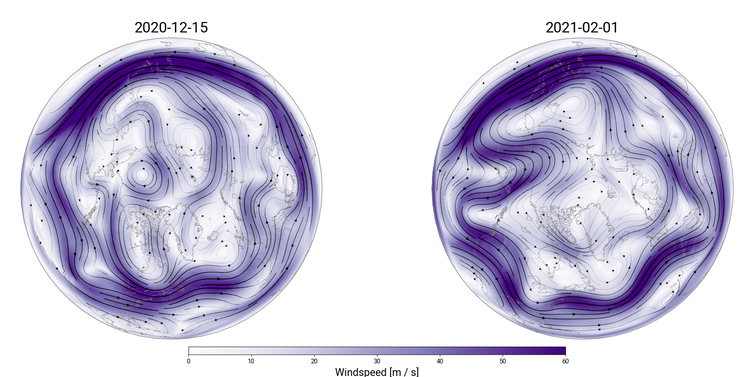 What exactly is the polar vortex? (And how can climate change make us COLDER?)